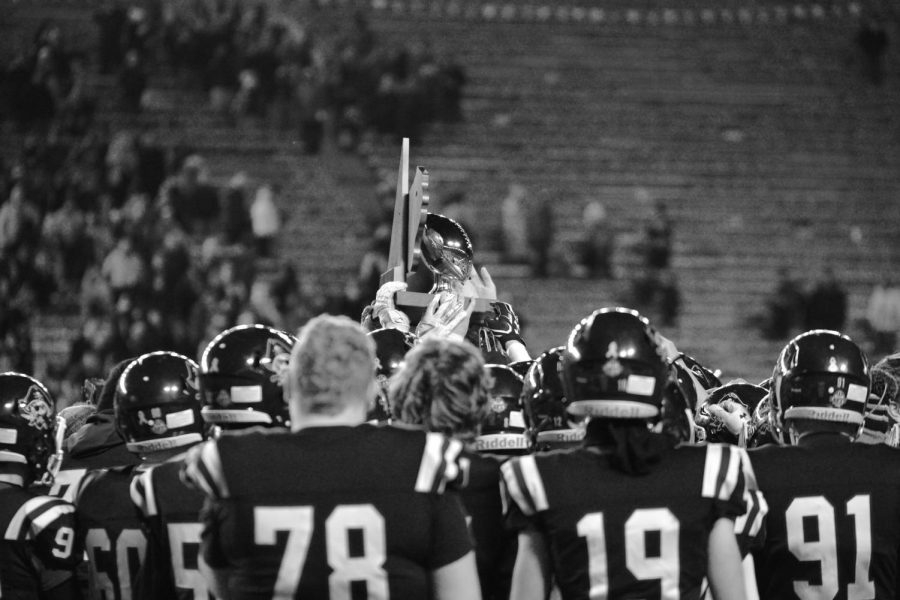 The Pirates raise their silver ball trophy after the state game on Nov. 22. Bay Port fell to Muskego 21-10. Photo by Mercy Gichobi

The 2019 season proved historic for the Bay Port football team, going further than any team in program history, bringing home the silver ball.
The Pirates finished with a school record 13 wins, with the only loss of the season coming in the Division One state championship.
The Pirates boasted four WFCA All-State selections: Braden Doyle, Max Meeuwsen, Isaiah Gash (WFCA Offensive Player of the Year), and Call Verlanic. Three players were also selected to the All-State Honorable Mention Team: Sam Plumb, Jose Ramirez, and Logan Geissler.
“It’s cool to have more guys on the All-State team this year from Bay Port,” two time All-State selection Braden Doyle said. “It shows how good of a program Bay Port has.”
This year continued the conference winning streak that has now spanned for 36 straight games for Bay Port, giving the Pirates four consecutive conference titles. A total of 22 players were named All-FRCC, including all Player of the Year honors for positions going to Pirates, along with Coach Gary Westerman winning FRCC Coach of the Year
After losing in level three of WIAA playoffs last year, the Pirates made some changes to how they go about their preparation for games.
“This year, every week was the same,” Braden said. “We prepared every week like it was a big game.”
The team thanks the support from the community and school all season to much of their record breaking season.
“Some of the teams when they came into Bay Port didn’t have many fans,” Braden said. “It was really nice to have so many fans this season; it meant the world to us.”
Multiple players from the football team will be continuing at the next level. Braden is signed to Central Michigan University, Max Meeuwsen is signed to the United States Naval Academy, along with Andrew Thomas, Logan Geissler, Isaiah Gash, and Dan Forystek, who also have Division One offers.
As for next year, Bay Port will be returning talented athletes Jayden Montgommery, Matt Gryzbowski, Dailin Danforth, and Alex Sylvester who were all difference makers for the Pirates this past season.
“It’s a shame we lost,” senior wide receiver David Carpiaux said. “But we’re proud of the whole team; we made history for the whole school.”